Rare Coins to Look Out For (Part III)

There were a lot of defects about Abraham Lincoln’s appearance. He was very tall and had a posthumously 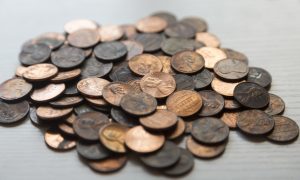 diagnosed facial asymmetry disease. But he didn’t have two ear lobes, which is why a ‘97 penny that appears to give him such a feature goes for $250.

Another state quarter worth more than 25 cents is a ‘99 Connecticut quarter that was broadstruck or not quite lined up correctly with the machine. If you’ve got one in your possession, you may be $25 richer.

Are you the owner of a ‘05 nickel that looks a little bit like the buffalo on the tails side was knifed? That’s due to a gouge that was on the die when the coins were minted. Though they usually sell for much less, a Speared Bison Jefferson Nickel has gotten a collector $1265.

These days, quarters and dimes are made from an alloy of nickel and copper. No silver. But prior to ‘65, 10-cent and 25-cent pieces were around 90% Ag, which means they have worth on the metals market. They’re not particularly rare, but you can still offload the coins for much more than their face value thanks to their composition.

In God We Trust? Not in ‘07. That was the year that the new George Washington dollar coins were circulated in the U.S. An unknown number of them were unintentionally minted without the standard inscription “In God We Trust.” In ‘07, experts predicted the flawed coins would ultimately sell for about $50 when the market settled down. The prediction was accurate since thousands of the coins have been found. The dollars, as they are called, go for up to $228.