How to Start a Coin Collection

Getting Started in Coin Collecting 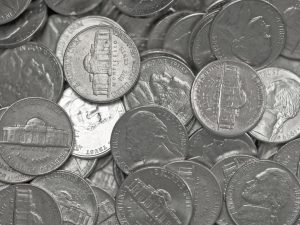 Beginning is easier than you thought. I’ll tell you how to start a coin collection with $4 worth of nickels. This is a good projects for children who are interested in collecting, as well as for adults who would like to collect coins but don’t really know where to begin.

You want to get your hands on two rolls of circulated nickels. The ideal spot to get them from is a convenience store or other business that often has small change. Don’t get nickels from a financial institution because they will probably be uncirculated nickels.

Put both rolls of nickels into a medium-sized plastic food storage container.

If they need cleaning, add a smudge of dish detergent and some hot water and lightly wash the nickels. Generally, cleaning coins isn’t recommended, particularly cleaning them with metal polishes and the like. If you get coins from circulation they are usually filthy, gently work the nickels around in the hot, soapy water for a couple of minutes, and then rinse well. Put them on a towel to dry.